audiowalk
Skjold and Our Future Baby! 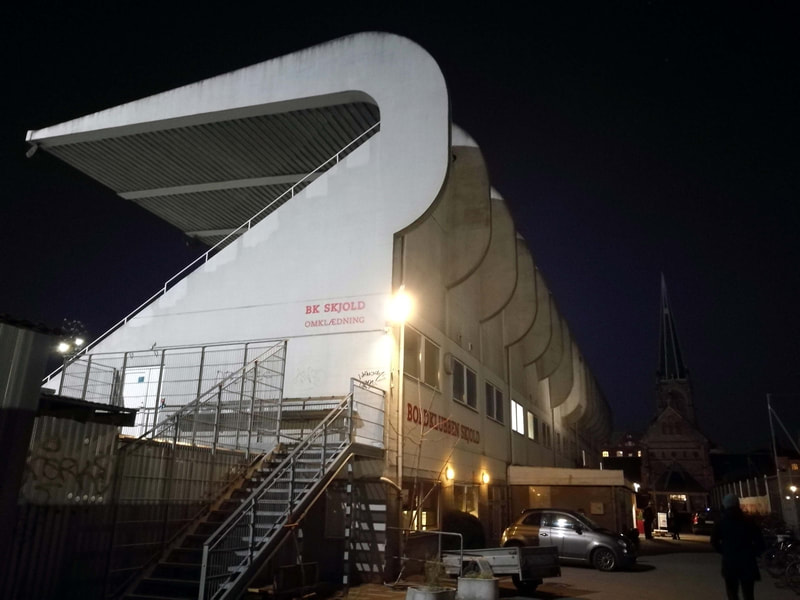 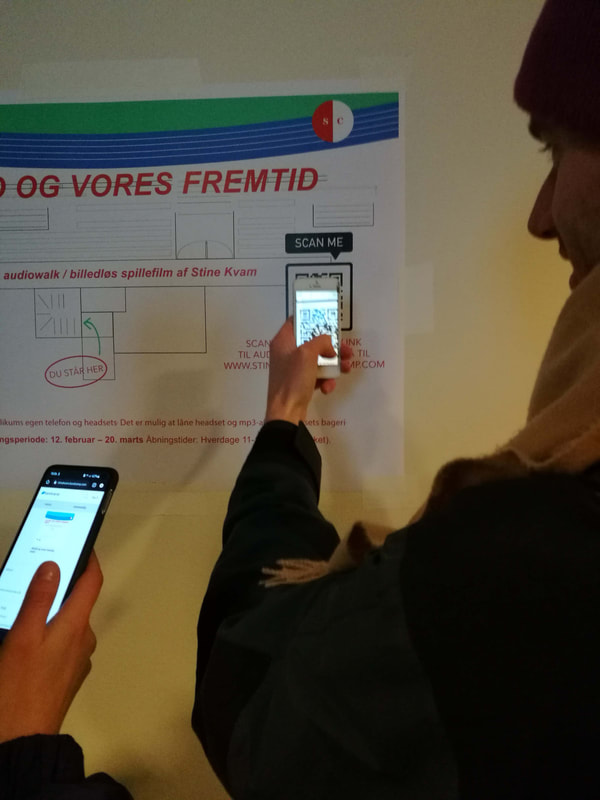 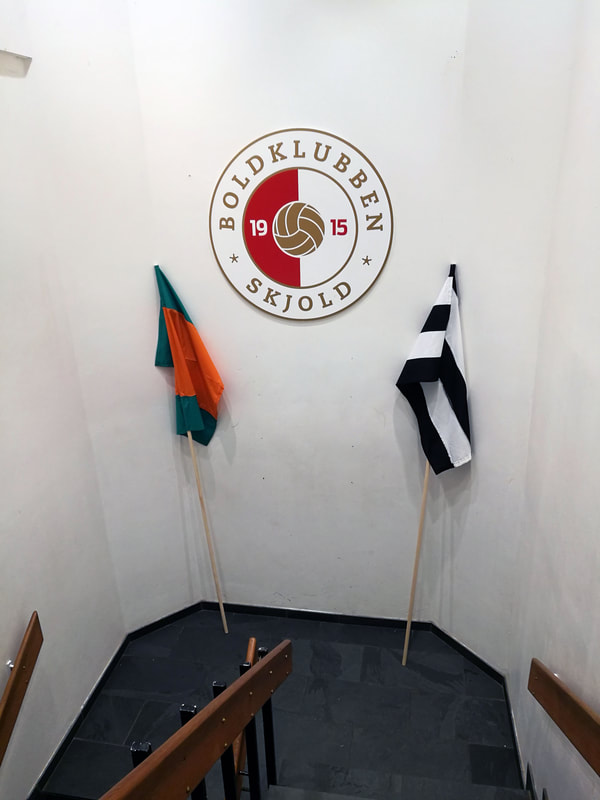 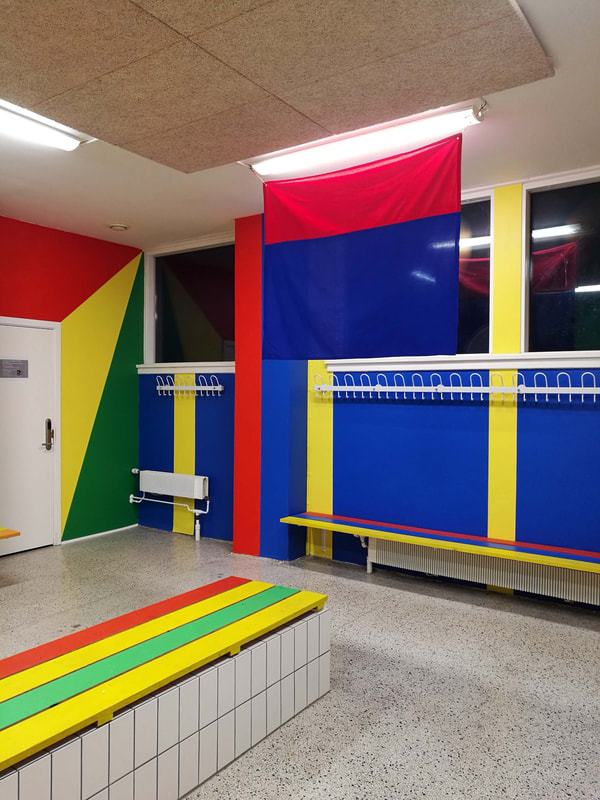 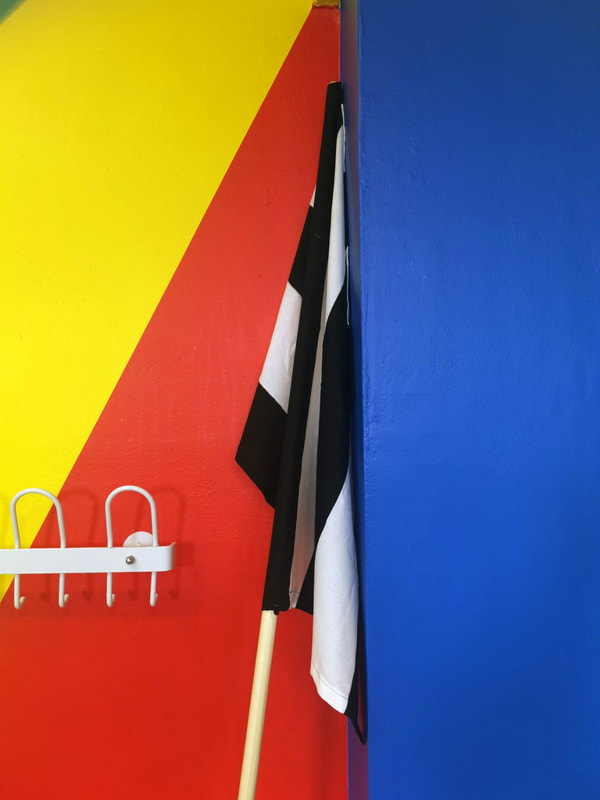 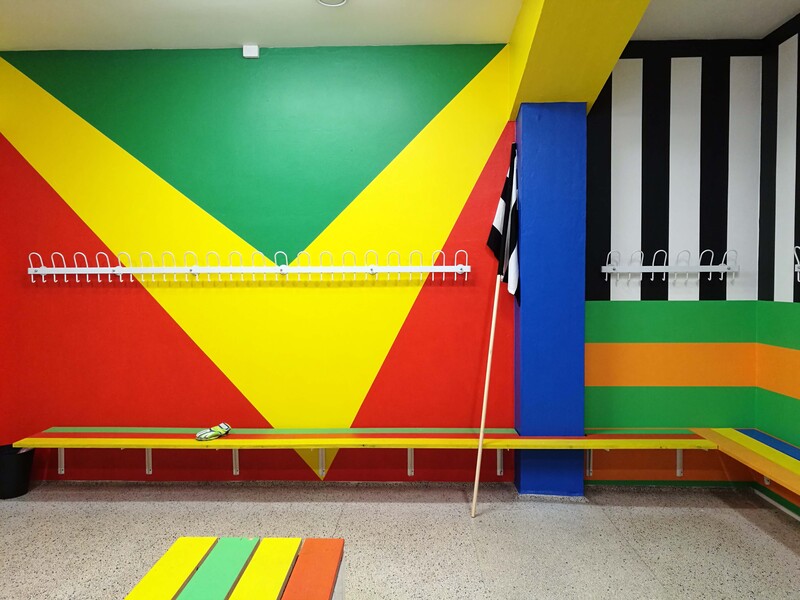 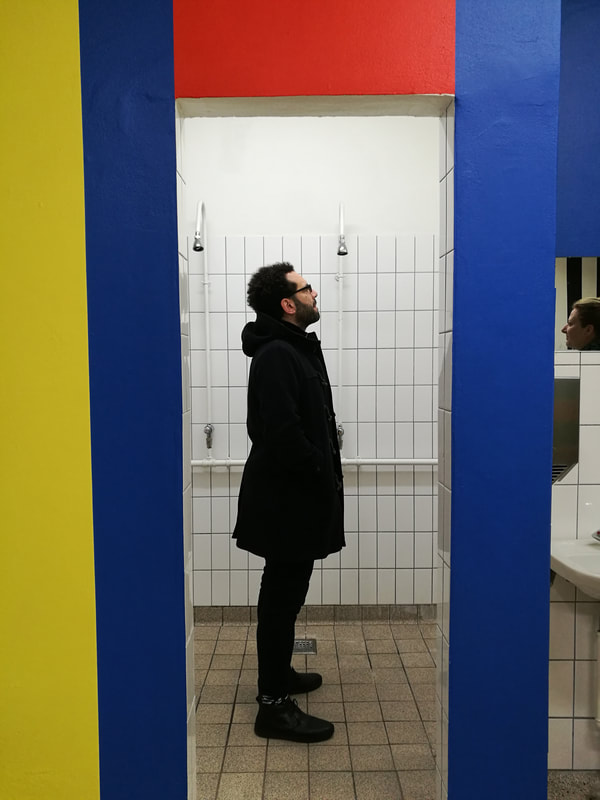 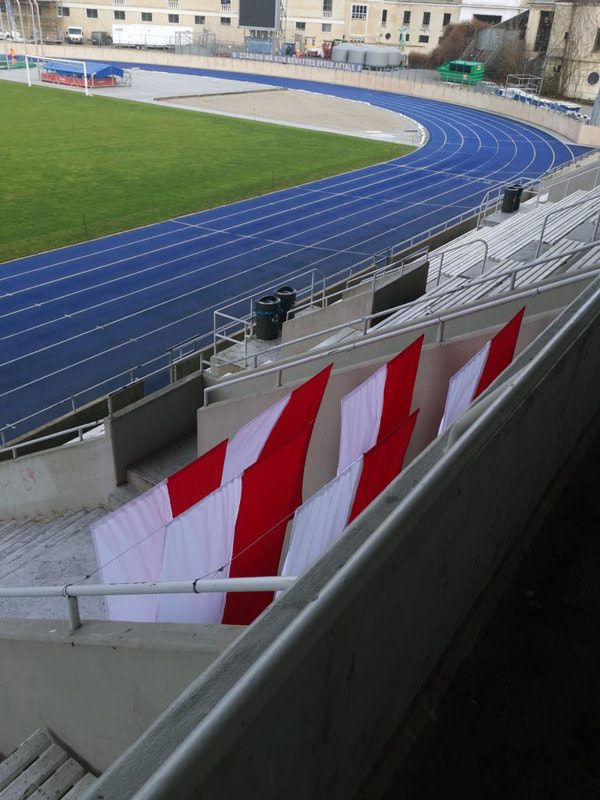 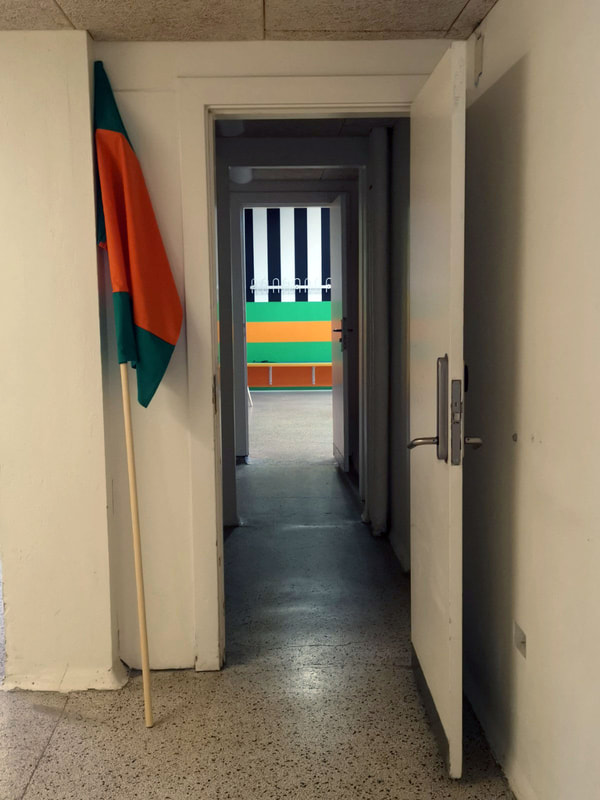 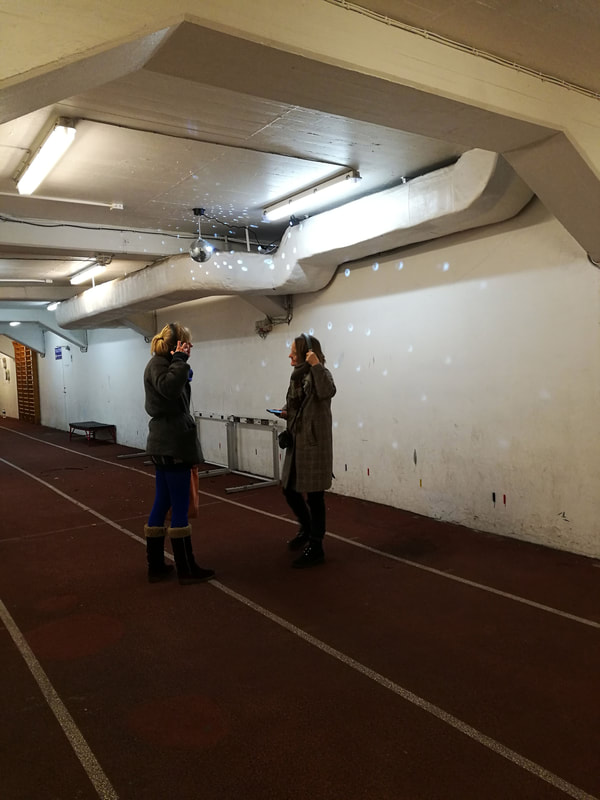 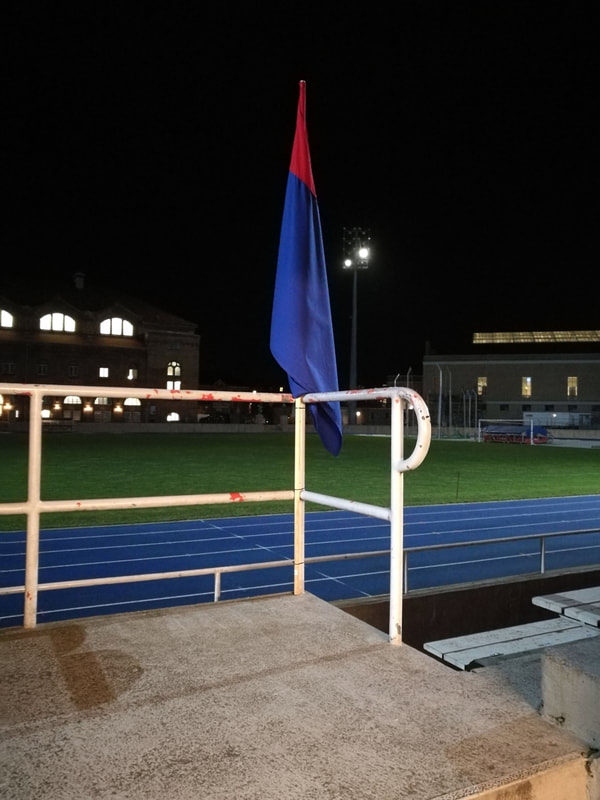 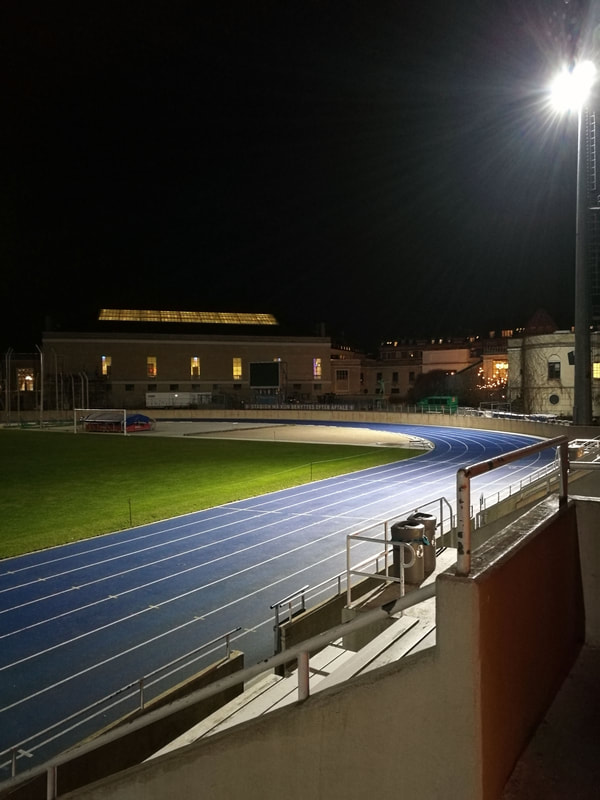 The color and design of the flags are a homage to Thorgej Steen Hansen's mural in one of Skjold's exhibition spaces.
As in an emotion-based pinball game, the audience is thrown between the concrete walls at Østerbro Stadium.

The football player, Sarah, becomes your I-perspective when you put the headphones on and follow the sound up the stairs and into the changing-room, where your teammates on Skjold's football team are waiting. Excited by anticipation, you and your friends are faced with a gigantic task. A task that mustn't go wrong. And yes, that's exactly what's happening. You lose. And it's your fault.

The audiowalks narration construction are well known structures from feature films. In this nonverbal audiowalk the audience is presented with the audio narrative and the physical scenario, the rest of the visual narrative is in the listeners' imagination.

The sound guides you up the stairs and in to the changing-room, where your friends already are changing clothes. You boost each other and prepare for the match. The mood is high, and you are all ready for battle.
The intensity increases with the emerging sound of a hopeful melody in the dressing room, and continues when your team steps out into the stands, between waving flags, as you gaze upon the green battlefield.

The sound of a lone trumpet finds its way to your chest and the match begins.

But what happened?
Suddenly everything is over.


The on-site audio recordings are recorded with binaural microphones, which provides a 3D experience of the sound and a feeling of being present during the recording. With the help of the sound, the audience can clearly place where the trumpeter stands, where Sarah and her friends are in the changing room, and where they are going when they enter the stadium.

The story in the work, or rather, the emotional state of the football player, comes to you through three songs written for this work. Composed and performed by the Egyptian-born rapper YUKKA and the Brazilian musician and sound producer Erik Medeiros. Songs that you may not understand much of the texts, which are in Arabic, Portuguese, Danish, and English. But the feelings are familiar to everyone.
This linguistic confusion and the global concrete aesthetic that Østerbro Stadium's grandstand building, means that one easily could imagine being in a football station in Cairo, Rio de Janeiro as well as in Copenhagen.


The exhibition is kindly supported by the Danish Art Foundation and the municipality of Copenhagen.
Powered by